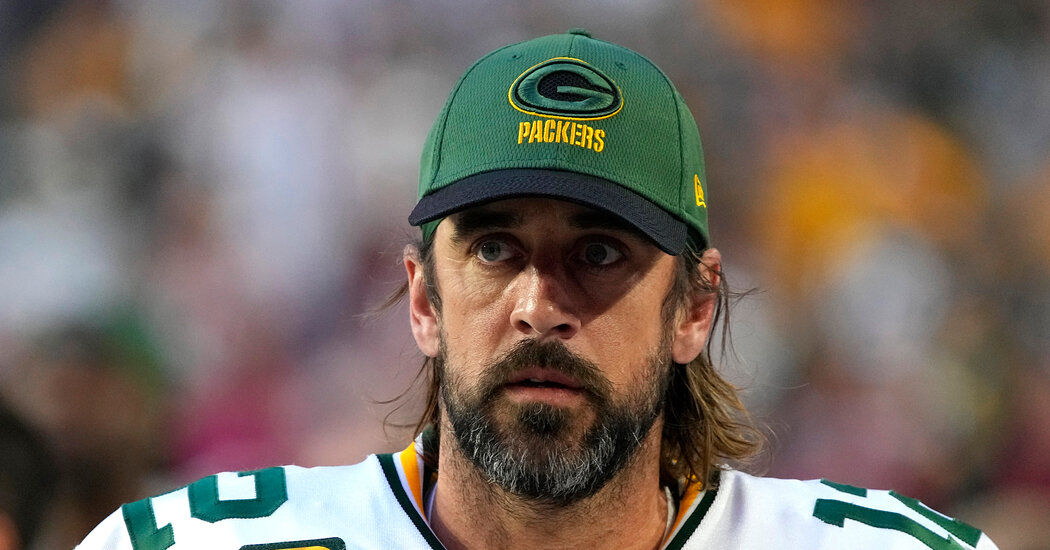 Aaron Rodgers on Friday spoke publicly for the first time since news broke that he was not vaccinated against the coronavirus and had tested positive, lashing out at the news media and saying he was a victim of a “woke mob” and “cancel culture.”

Rodgers, the Green Bay Packers’ starting quarterback and the N.F.L.’s reigning Most Valuable Player, confirmed news that rocketed around the sports world on Wednesday: that he had tested positive for the virus. He will miss Green Bay’s game on Sunday against Kansas City and, like all unvaccinated players in the league who test positive, must isolate for 10 days and test negative in order to return. Vaccinated players can return within 24 hours after they test negative twice, according to protocols jointly agreed upon by the N.F.L. and the N.F.L. Players’ Association.

Rodgers’s comments came on The Pat McAfee Show, a program he visits weekly. During the lengthy interview, Rodgers criticized vaccine mandates and said that personal choice should determine what happens to an individual’s body.

“I’m not some sort of anti-vax, flat-earther,” Rodgers said. “I believe strongly in bodily autonomy and the ability to make choices for your body, not to have to acquiesce to some sort of woke culture or crazed individuals who say you have to do something.”

Rodgers in August told reporters during training camp that he had been “immunized” against the virus, a term that the journalists did not ask him to define further. On Friday, Rodgers said he did not want to take the Pfizer or Moderna vaccines because he had an allergy to an ingredient in them. He was also hesitant about the Johnson & Johnson vaccine, he said, because the Food and Drug Administration recommended a temporary pause in administering the company’s shot in the spring because of rare instances of blood clots

Advertisement
. Rodgers also said he was wary of the vaccines’ potential effects on fertility, a theory that most medical experts have said is unfounded.

In consultation with medical advisers, Rodgers said, he began an immunization process that the league did not include in its vaccination options. The quarterback petitioned the N.F.L. to approve his plan — for which he said he had gathered over 500 pages of research — but it was denied.

Rodgers said he had followed most of the protocols for unvaccinated players, except for wearing a mask during his weekly news conferences. He also attended a Halloween party maskless with other people, another violation of the protocols.

Unvaccinated N.F.L. players are subject to more stringent requirements, inside and outside team facilities. They are not supposed to leave hotels when on the road for games; they must work out individually in the weight room, and they cannot use the sauna or eat with teammates. Rodgers said he was also forced to wear a yellow wristband to identify his status.

“Some of the rules are not based in science at all,” Rodgers said. “They’re based purely in trying to out and shame people.”

“The great M.L.K. said, ‘You have a moral obligation to object to unjust rules and rules that make no sense,’” he added, paraphrasing the civil rights leader Martin Luther King Jr.

Davante Adams, the Packers’ leading receiver, and defensive coordinator Joe Barry tested positive for the virus and missed last week’s game against the Arizona Cardinals. The earliest Rodgers could potentially be available again is Green Bay’s Week 10 game against the Seattle Seahawks on Nov. 14. Jordan Love, the team’s first-round draft pick in 2020, will start in Rodgers’s place Sunday.

The league said in a statement Wednesday that it would review the Packers’ handling of protocols. “The primary responsibility for enforcement of the Covid protocols within club facilities rests with each club,” Brian McCarthy, an N.F.L. spokesman, said. “Failure to properly enforce the protocols has resulted in discipline being assessed against individual clubs in the past.”