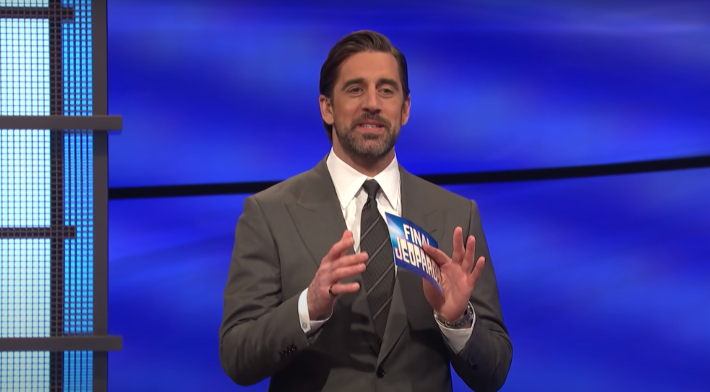 Aaron Rodgers really wants the full-time job of hosting Jeopardy! and, if you believe the show’s producers, he has a good shot at actually getting that gig later this year. But while the other contenders finish out their guest hosting duties this month, at least he can claim he’s still hosting episodes in a fictional canon.

Rodgers will serve as the host of Jeopardy! on an episode of The Conners, running the board while a character from the show makes an appearance during an upcoming episode. The show’s Twitter account shared the news on Saturday, announcing Rodgers as one of the guest stars of the final two episodes of the show’s third season.

In the trailer, Aunt Jackie flirts with Rodgers while she appears on the show and he hosts.

“Aaron Rodgers, this — I’ve been feeling some obvious chemistry here.”

He doesn’t appear to notice the advances, taking the role a bit more seriously than Jackie, who appears to be in the red money-wise during the game.

Rodgers was really enthusiastic about Jeopardy! during his two-week hosting stint, using the occasion to raise COVID-19 relief funds, chat with supporters and share clips from the show. He’s yet to address The Conners and his appearance on social media just yet, but it’s another example of his commitment to Jeopardy! that he wants to host in the ABC television canon, too. We’ll have to wait and see if he gets another chance at the actual Jeopardy! stage later in the year, but he certainly continues to look the part.