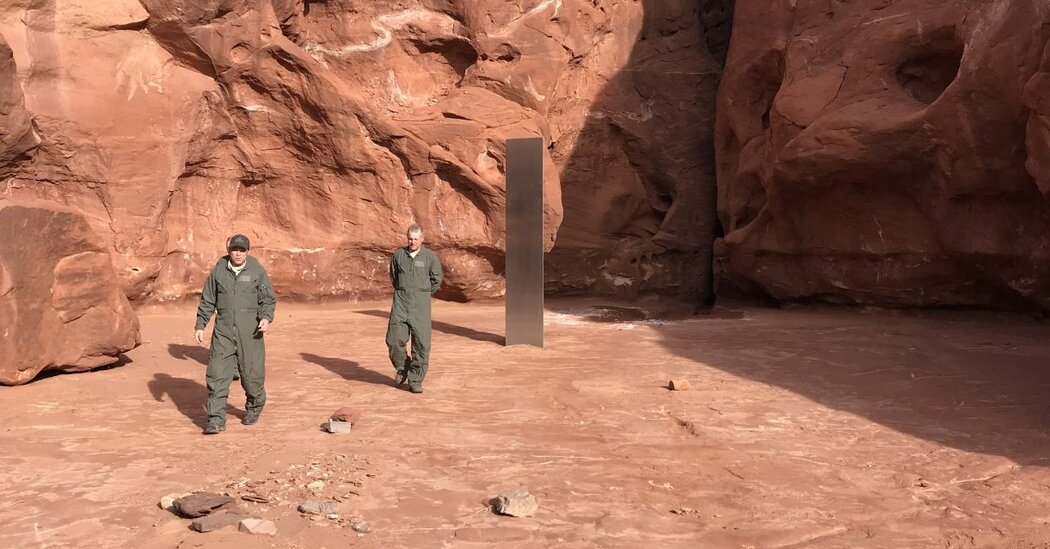 At the base of a barren slot canyon in Utah’s Red Rock Country, a team that was counting bighorn sheep by helicopter spotted something odd and landed to take a closer look.

It was not a sheep.

It was a three-sided metal monolith, about 10 to 12 feet tall, planted firmly in the ground with no clear sign of where it came from or why it was there. The Utah Department of Public Safety, revealing its existence to the wider world on Monday, said the team found the “unusual object” last week in southeastern Utah, during a survey with the state wildlife agency.

“While on this mission, they spotted an unusual object and landed nearby to investigate further,” the department said in a statement. “The crew said there was no obvious indication of who might have put the monolith there.”

The object was found in a remote area that Aaron Bott, a spokesman for the Utah Division of Wildlife Resources, described as rugged and very rocky, with many canyons and potential hazards. “It’s a tough place to get to on vehicle and on foot,” he said.

“We fly pretty low for these surveys so we can identify the gender of the sheep, and while we were doing this we found this strange metallic monolith out in the middle of the desert,” he said. He described the object as an “anomaly,” but added that it was “not too uncommon to find weird things that people have been doing out in the desert.”

In photos and videos taken by a team member and released by the department, the survey crew can be seen descending into the alcove toward the object. “OK, the intrepid explorers go down to investigate the alien life form,” a crew member jokes in one of the videos. “Who does this kind of stuff?”

“It’s pointed right at the only crack,” another crew member says, gesturing at a narrow slot canyon in the red rock formation. “Yeah,” the first man replies. “That is just wild.”

The helicopter pilot, Bret Hutchings, told the local news station KSL-TV that as the crew approached, “we were kind of joking around that if one of us suddenly disappears, then I guess the rest of us make a run for it.”

But Mr. Hutchings said it was probably an art installation. “I’m assuming it is, you know, some new wave artist or something, or somebody that was just a big ‘2001: A Space Odyssey’ fan,” he said, referring to the Stanley Kubrick film in which a matte black slab is discovered by curious, increasingly agitated primates.

“I have to admit, that’s been about the strangest thing that I’ve come across out there in all the years of flying,” he added.

As Utah officials shared photos of the discovery, many other observers noticed the similarity, especially in one photo that shows a crew member who had clambered onto another’s shoulders to look at the monolith’s top.

On Facebook, the Utah Highway Patrol shared photos of sheep and the object, asking the public for its thoughts. “During the count they came across this (sheet of metal?), buried in the middle of nowhere … what do you think it is?” the caption said

Respondents had suggestions: a “resonance deflector,” “an eyesore,” “some good metal.” Some theorized, vaguely, that it was a satellite beacon. Others joked that it was a Wi-Fi router. Some said it was a leftover movie prop — Red Rock Country has served as the backdrop for “Indiana Jones,” “Star Trek” and “Mission Impossible” movies. (A spokeswoman for the Utah Film Commission said, “To our knowledge, the monolith that was found in Utah this week is not from a film production.”)

The Art Newspaper observed that the object resembled the “free-standing plank sculptures” of the Minimalist artist John McCracken, who lived in New Mexico before his death in 2011 and whose work is represented by the David Zwirner Gallery.

“The gallery is divided on this,” Mr. Zwirner said in a statement. “I believe this is definitely by John.”

He added: “Who would have known that 2020 had yet another surprise for us. Just when we thought we had seen it all. Let’s go see it.”

Lt. Nick Street, a spokesman for the Department of Public Safety said the authorities were confident that “it’s somebody’s art installation, or an attempt at that.”

He said the monolith appeared to be made of stainless steel, put together “with human-made rivets” and embedded into the rock, though how deep was a mystery.

“Somebody took the time to use some type of concrete-cutting tool or something to really dig down, almost in the exact shape of the object, and embed it really well,” he said. “It’s odd. There are roads close by, but to haul the materials to cut into the rock, and haul the metal, which is taller than 12 feet in sections — to do all that in that remote spot is defi

Lieutenant Street added that officials had no idea how long the monolith has been there, saying, “For all we know it’s been installed since the ’40s and ’50s.”

The authorities declined to disclose the exact location of the monolith, saying that attempts to visit it could be dangerous. “If individuals were to attempt to visit the area, there is a significant possibility they may become stranded and require rescue,” the Department of Public Safety said.

Lieutenant Street said the Bureau of Land Management would determine whether to investigate further or to remove the monolith, for instance if it is found to affect wildlife. In a statement on Tuesday, the bureau said, “Although we can’t comment on active investigations, we would like to remind public land visitors that using, occupying, or developing the public lands or their resources without a required authorization is illegal.”

As for the team’s original mission? It was a success, said Mr. Bott, the wildlife official. “The sheep are doing well,” he said. “It’s a robust population.”