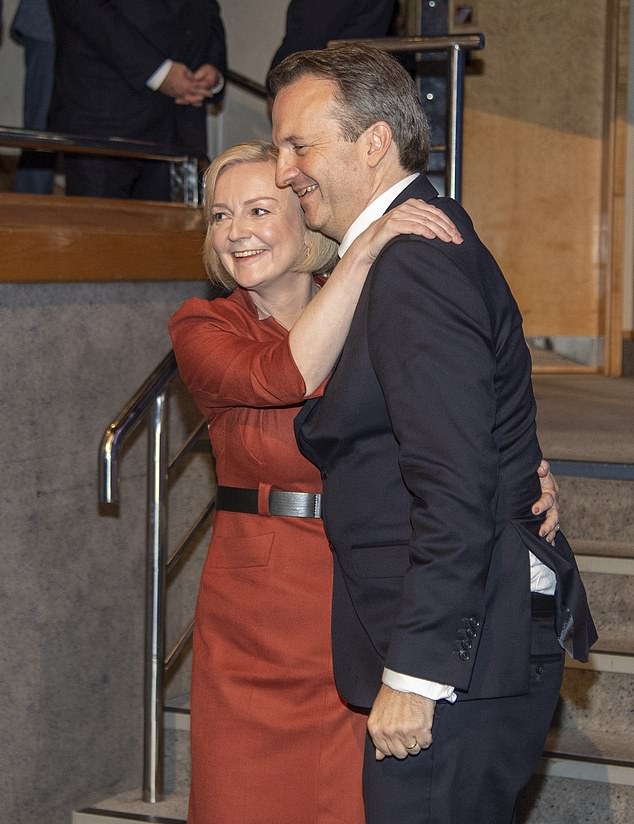 Well, wouldn’t you know it? The Prime Minister’s conference speech was a triumph, a pugnacious pinger which was delivered with aplomb.

Even an interruption by a pair of screeching eco-protesters failed to knock her off her stride.

Au contraire, the bellowing from the covert crusties seemed to fire up the Prime Minister’s circuits like a jolt from a Tesla battery.

Oh sure, Truss’s jokes can be clunky and her timing as off as a month-old carton of whipping cream. She’s never going to challenge Phoebe Waller-Bridge in the comedy stakes, but by her own standards she yanked a rabbit out of the hat – even if it looked a bit mangy.

Expectations had not been high. A rare tension gripped the hall as we waited for the PM to arrive. Pot-bellied photographers jostled at the front of the stage and nerve-frazzled aides gnawed furiously on their Biros.

‘The Prime Minister’s conference speech was a triumph, a pugnacious pinger which was delivered with aplomb’ (Pictured: Truss with her husband)

Anticipation mounted. Some of the more loyal Tory members had come to give their leader their support.

Others, like rubber-neckers at a motorway pile-up, were preparing to gawp in morbid fascination at the tangled debris of her career.

Yet, as Truss click-clacked on stage to M People’s ‘Moving on Up’, there was an unexpected springiness in her step. This is a woman who does not give up.

Gone was that unsteady gait we got used to during the leadership hustings, the one where she resembled a Bolshoi ballerina balancing on champagne flutes.

Activists began cooing as she laid out her brand of stiff Conservatism. She wasn’t interested in telling people what to think or how to spend their free time, she said. Heavens, no.

Nor was she interested in how many ‘two-for-one offers you buy’: a reference to a now-defunct government plan to ban so called ‘BOGOF’ items from supermarkets. (The architect of that hare-brained idea by the way? That unquenchable bossy boots Matt Hancock, RIP.)

‘Activists began cooing as she laid out her brand of stiff Conservatism. She wasn’t interested in telling people what to think or how to spend their free time, she said. Heavens, no’

The speech contained gritty stuff about how Truss had ‘fought to get jobs, to get pay rises and get on the housing ladder’ while also raising two daughters. We were reminded she’s the first Prime Minister who went to a comprehensive. Shocking, but true.

From the way Truss was moving, it was clear that performance engineers had gone to work on her.

That robotic left arm had been practising a greater range of gestures: up, down, left, right. A frantic bookmaker signalling to his runner.

She had also learnt – occasionally – to avert her gaze from the autocue and concentrate on her audience. She referred to them all as ‘my friends’. I presume that Michael Gove left the conference early. Then suddenly, a volley of boos erupted. Two protesters stood up in one of the middle rows holding a Greenpeace banner.

The PM remained cool. Rarely do protesters leave without a tussle, and these two excitable ladies had surprising strength for their size. Presumably, they hoped their disturbance might knock the wind out of the leader. In fact the protest only rallied the crowd further behind her. That’s how it always goes.

And the timing of their intrusion couldn’t have been better: it animated the Prime Minister, just as she was about to get to the meat of her speech.

‘In fact the protest only rallied the crowd further behind her. That’s how it always goes’

High taxes made her angry and so cutting them, she said, was the right thing to do, both ‘morally and economically’. At this, an enthusiastic man in front of me karate-chopped his arm-rest and squealed: ‘Eggzackly!’

But achieving economic growth will not be easy, Truss warned. The past few days had proved it. An evil ‘anti-growth coalition’ was determined to thwart her.

She got particularly huffy when referring to the ‘talking heads and Brexit deniers’ who taxi from ‘North London townhouses to the BBC studio’. Was that a swipe at Tony Blair’s old sidekick Alastair Campbell? I can think of quite a few candidates, to be fair.

As she concluded her speech, Truss shot the hall an Olympic skater’s grin and exited to a volley of hurrahs – the sort of relieved applause that goes up when a low-cost airline screeches on to the tarmac after a bumpy flight. Nadhim Zahawi won the coveted race to be the first minister out of his seat to applaud her.

The speakers pumped out throbbing dance music and the PM and her husband Hugh bounded up the hall steps. There may be far steeper climbs to come – but for now, this chaotic conference had been saved from total oblivion.