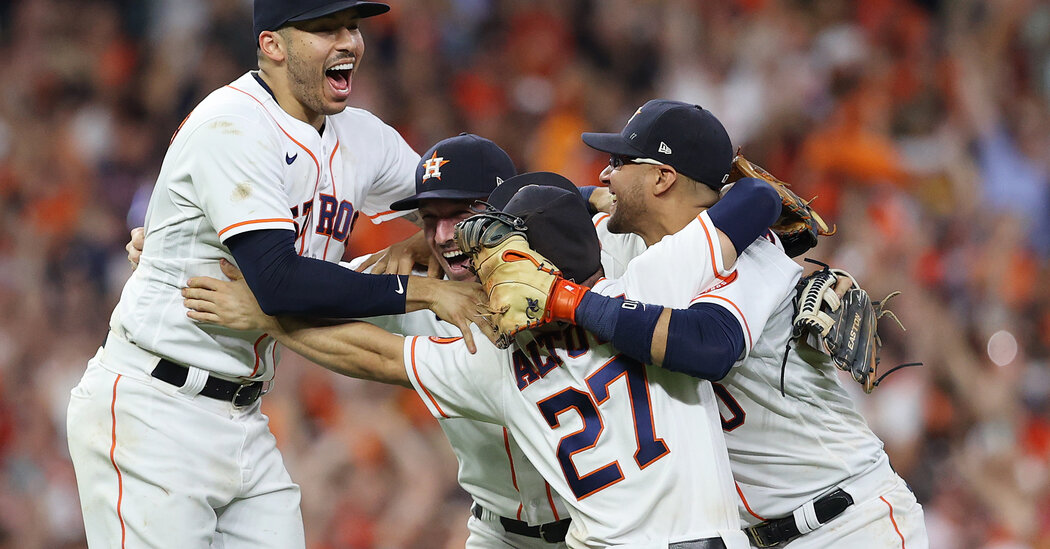 HOUSTON — Two were drafted first overall. Two have won their league’s Most Valuable Player Award. They come from all over: Cuba and Curaçao, Puerto Rico and Venezuela, California and Georgia and Mississippi and New Mexico. And all of them have played for only one team in the majors.

The opener of the 117th World Series, on Tuesday at Minute Maid Park in Houston, will be the 50th postseason game together for the Astros’ infielders: first baseman Yuli Gurriel, second baseman Jose Altuve, shortstop Carlos Correa and third baseman Alex Bregman.

The 50 games will extend a postseason record for a single infield, and the Astros’ group has now taken five deep postseason runs together. All four infielders have made multiple All-Star teams except Gurriel, 37, a longtime star in Cuba who won this year’s American League batting title.

Consider this quartet of Atlanta Braves: first baseman Freddie Freeman, second baseman Ozzie Albies, shortstop Dansby Swanson and third baseman Austin Riley. They nearly became the first infield ever with 30 home runs by each player: 33 for Riley, 31 for Freeman, 30 for Albies and 27 for Swanson.

Swanson is the only starting infielder in this World Series who has played for another organization. The Arizona Diamondbacks drafted him out of Vanderbilt with the first pick in 2015 — just ahead of Bregman, an Albuquerque kid who played at Louisiana State. Six months after the draft and early in Swanson’s minor league career, Arizona traded him to the Braves, the team he loved as a boy in Marietta, Ga.

“One thing I have a lot of admiration for about him is taking an extra base; a ball that everyone thinks is a single, he turns into a double,” Bregman said of Swanson. “And Riley’s unbelievable. There’s a reason why he’s getting M.V.P. chants in Atlanta. Unbelievable power. I definitely wish I had his arm at third base.”

The Braves drafted Riley from a high school in DeSoto, Miss., near the end of that first round in 2015. Now 24, Riley is the same age as Albies, a speedy, slick-fielding switch-hitter from Curaçao. He has not won an M.V.P., as Altuve did for Houston in 2017, but he has more homers and nearly as many hits as Altuve had at the same age.

“People were saying I can’t get the job done because I’m small,” said Albies, who is 5-foot-8, two inches taller than Altuve. “I’m like, ‘Altuve’s smaller than me, and he’s done it.’ The first time I saw him, we said hi to each other. He’s actually a little smaller than me. I thought, ‘If he can do it, why can’t I do it?’”

Freeman has been doing it for years, since reaching the majors in 2010 and hitting his first home run off the future Hall of Famer Roy Halladay. His latest stellar season — a .300 average, an .896 on-base plus slugging percentage and a National League-best 120 runs scored — followed up his M.V.P. performance during the pandemic-shortened 2020. Freeman made five postseason trips before this fall, when he finally won a pennant despite injuries to several teammates.

“We have had like 40-foot potholes that we’ve hit, like humongous speed bumps,” Freeman said of Atlanta’s adventurous season. “Everything you could possibly see in a road, we hit it — and we still somehow overcame all that.”

Freeman is facing free agency after the season, like Correa, who started the Astros’ reconstruction by signing from Puerto Rico as the first overall pick in 2012. Correa hit a career-high 26 homers this season and had by far his best year on defense. That makes sense, considering the infield’s history together.

“I think the biggest benefit is that we know each other so well that you know how much ground you can cover,” Correa said, adding later, “We’ve been playing together for so long that it’s just automatic by now.”

Free agency could break up one or both infields this winter, but one group will enter the off-season as champions.

There are numerous connections between the teams even after you get past their star-studded infields:

This is hard to believe, but it’s true (we triple-checked): The 2021 World Series is the first to feature the teams that lost in the League Championship Series the previous year. Houston and Atlanta both fell in Game 7 of the L.C.S. in 2020 but returned this month to win the pennants. (Close call: 1980, when Philadelphia faced Kansas City. Both teams had lost the L.C.S. in 1976, 1977 and 1978, but missed the playoffs in 1979.)

Another World Series, another appearance by Charlie Morton, who will start for Atlanta in Game 1. Morton also pitched for Tampa Bay last year and for Houston in 2017, when he won Game 7 at Dodger Stadium with four strong innings of relief.

Morton will always have a place in Astros lore because he was on the mound for the last out of that World Series. So how strange is it that he is now facing the Astros in the World Series? Well, it has never happened before. Morton will become the first pitcher to close out a World Series for one team and then face that same team in a future World Series.

The National League West consists of Arizona, Colorado, Los Angeles, San Diego and San Francisco, a sensible geographical arrangement. For 25 seasons, though, the division included teams east of the Rockies, including Atlanta and Houston.

The Astros were in town on Oct. 5, 1991, when Atlanta’s baseball renaissance officially started. On that day, John Smoltz tossed a complete game against the Astros to clinch the N.L. West, just one year after the Braves had finished last. That started a streak of 14 consecutive division titles, unprecedented in baseball history.

Only three of those division titles actually came in the N.L. West, though. Baseball realigned the divisions in 1994, placing Atlanta in the N.L. East and Houston in the newly created N.L. Central. The Astros switched again in 2013, jumping to the A.L. West.

Both teams are missing high-impact players because of injury. Atlanta lost outfielder Ronald Acuña Jr. to a torn anterior cruciate ligament in July, and Houston’s ace right-hander, Justin Verlander, did not pitch all season after Tommy John surgery. A more recent injury knocked out Lance McCullers Jr., who began this postseason as the Astros’ No. 1 starter. McCullers, who was 13-5 with a 3.16 earned run average this season, started twice in the division series but is out for the World Series with a muscle strain in his forearm.

A Team by Any Other Name

Neither team uses its original nickname. The Braves — who have resisted suggestions that they change their name, as Cleveland did until it adopted Guardians as a name — began as the Boston Red Stockings in 1871. They were later known as the Beaneaters, Doves and Rustlers through 1911 but have been the Braves ever since, with an interlude as the Bees from 1936 to 1940.

According to MLB.com, the Braves got their current nickname when they were sold in 1912 to James Gaffney, an alderman for Tammany Hall, “which used an Indian headdress for its emblem and referred to its members as Braves.”

The Astros, meanwhile, began as the expansion Houston Colt .45s in 1962, and stayed that way for three seasons. In the logo across the Colts’ home jerseys, the smoke from a revolver formed the letter “C” in Colts. As the Colt Firearms Company pushed for revenues from the team’s use of its name, the franchise pivoted to Astros in 1965, celebrating the city’s connection to the space program.

As their owner at the time, Roy Hofheinz, who was known as the Judge, put it: “The name and insignia will help dispel the image of Texas as a land of cowboys and Indians.”

Nobody rocks a wristband the way Astros Manager Dusty Baker does. In 1986, his final year as a player with Oakland, Baker met a man from Los Angeles named James Mims who asked him to wear a wristband with Baker’s likeness sewn onto it. The product caught on with dozens of other players, and Baker still wears it now. This postseason, the featured patch has Baker’s face and signature on a blue background outlined in orange (the Astros’ colors), sewn onto a tri-colored wristband of gray, yellow and red. Now that’s style.

Atlanta, meanwhile, has long worn some of the most finely detailed uniforms in baseball; no other team goes to the trouble of outlining the belt loops on the back and sides of its pants. It’s an extra, subtle splash of color unique to that franchise.

Ten players have played only for Houston and Atlanta, including Evan Gattis, who hit .300 for the Astros in the 2017 World Series. One hundred others have played for both teams, as well as others, including Jim Bouton, Sid Bream, Joe Niekro, Billy Wagner, Jimmy Wynn and the Hall of Famer Eddie Mathews, who hit 493 homers for the Braves — in Boston, Milwaukee and Atlanta — and 10 for the Astros in 1967.

Troy said that his sister, Erin, reached him on FaceTime from the field in Atlanta, just after Brian clinched their date in the World Series. “To have both of us do it in the same year and be able to go up against each other,” Troy Snitker said, “it’s a dream come true.”

The Numbers You Won’t See

The Astros honor six players not in the Hall of Fame. Besides Jeff Bagwell (No. 5), Craig Biggio (7) and Nolan Ryan (34), who are all in Cooperstown, Houston keeps all of these numbers out of circulation: No. 24 for Jimmy Wynn, 25 for Jose Cruz, 32 for Jim Umbricht, 33 for Mike Scott, 40 for Don Wilson and 49 for Larry Dierker. (Jackie Robinson’s 42, of course, is retired by all teams.)