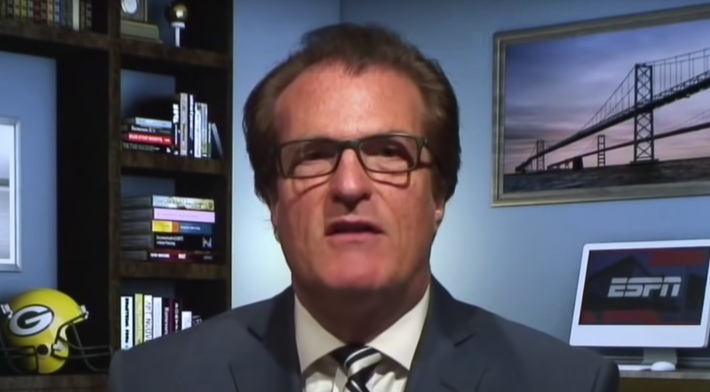 Calling Mel Kiper Jr. the GOAT of NFL Draft coverage undersells his importance to a gigantic date on the league’s offseason calendar. Kiper hopped onto ESPN Daily with Pablo Torre on Friday to discuss his role in growing the industry, from his pre-ESPN days to his role as the face of Draft coverage for the Worldwide Leader for nearly four decades.

All of it’s good, and if you like Draft talk, we highly recommend listening. Having said this, there is one thing we need to highlight from the episode, something Kiper tweeted about after it was posted:

Remember: Get the pizza with cheese, THEN take it off — and add the mashed potatoes. Give it a shot.

Ok, so, I read this tweet and felt compelled to immediately find where in the episode Kiper discusses how he consumes pizza. It turns out this was not an inside joke between himself and Torre — after discussing his well-documented breakfast that he eats whenever he can get his hands on it (pumpkin pie with whipped cream), Kiper broke down how he consumes pizza with the same gusto that he breaks down tape on a safety out of UT-Chattanooga with an UDFA grade.

“This is what I do, Pablo,” Kiper said at the 21:07 mark of the pod. “I take the cheese off. I take the cheese off the pizza, ok? And I eat the pizza with mashed potatoes. So mashed potatoes and pizza without cheese is what I do. Now, you say — and I think I’m healthy because I’m not eating the cheese, right? I don’t eat the cheese, I just leave a little on there for the flavor. You’re just like, ‘Why do you get away…’ the cheese does give you the flavor, and I do leave a little bit on … just a liiiiittle, just a liiiiittle, but it’s mostly just the sauce and the dough, and then I put the mashed potatoes on it, and that’s what I do.”

As someone whose last name ends in a vowel and calls Naples their ancestral home, I found this baffling. Beyond the fact that this is essentially carbohydrates + tomato sauce + a different carbohydrate and eating it would almost certainly require a nap, the issue I am having is wrapping my head around what this tastes like. Mashed potatoes are, obviously, terrific, but this seems like it’d just be a big textural mess with some tang from tomato sauce. And even then, unless these potatoes are really cheesy and really garlicky, it’s just hard to fathom how this works. While I am very much empathetic to baked potato pizzas, which does not have cheese and sauce but covers it with potatoes and things like cheese and bacon, this is very much not that.

Mel, you’re a legend, but candidly, this seems not great, although I am willing to try the exact slice you have — from the pizza place you like the most, with your preferred mashed potatoes — to reevaluate. Feel free to email at your leisure.