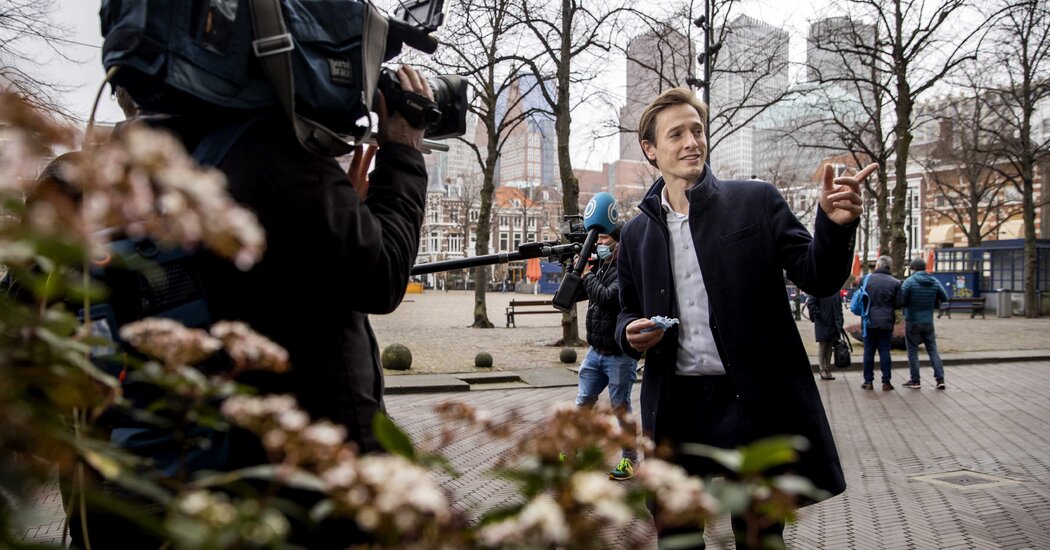 Lost among the mostly humdrum national elections in the Netherlands this week was the emergence of Volt, an anti-populist, pro-Europe party made up of students and young professionals that snatched three seats in the Dutch Parliament — the first national electoral success in its five years of existence.

Volt wasn’t the only outsider group to win a seat or two in the elections. One politician arrived at Parliament driving a tractor with flashing lights to claim her newly won seat for a farmer’s party. Sylvana Simons, a former TV presenter, won a seat for “Bij1,” an anticapitalist party. A new far right, anti-immigrant party won four seats.

Over the last two decades, however, it was populists and far right parties that played the insurgent role in Dutch politics, promoting anti-immigrant, anti-establishment and anti-European policies. While never a serious threat to seize power, in 2016 representatives of these parties initiated and won a referendum in the Netherlands on an E.U. trade treaty with Ukraine, temporarily halting the deal.

This makes this week’s victory of newcomer Volt all the more remarkable. The party is staunchly pro-Europe, something that most traditional parties had thought was a complete turnoff for voters.

“Most people of my generation grew up paying in euros and never having to think about crossing borders,” said Laurens Dassen, 35, the party’s Dutch leader. “For us, Europe is a fact of life.”

Prime Minister Mark Rutte, whose center-right Party for Freedom and Democracy comfortably won the greatest number of seats for the fourth time since 2010, has had a tense relationship with Europe. Last year, for example, he upset Southern European countries when he refused to discuss financial support during the pandemic, and brought a biography of Chopin to the meetings because he wasn’t planning on talking anyway.

The success of Volt in the Netherlands is all the more remarkable in that it isn’t even a Dutch party but an offshoot of a European movement, with 9,000 members scattered across Europe, and a few more in Switzerland and Albania. The main party was established in 2016 by Andrea Venzon, 29, an Italian living in London, and has a presence in every one of the 27 member states of the European Union.

Mr. Dassen, who was raised in Knegsel, a village near Eindhoven, played in the local youth orchestra and, after studying business management, went to work at ABN Amro bank checking transactions for money laundering.

But he was worried about the rise of populism and far-right parties, he said, and “in 2018 I read an article

Advertisement
about Volt, decided to join and gave up my job some months later to really try to get the party started.”

In the Dutch elections Volt piled up heavy vote totals in several Dutch student cities like Delft and Leiden, powered in part by a social media campaign and a broad network of volunteers.

Another pro-European party, the D66, won an extra four seats this week, making it the second largest party in the parliament. Its leader, Sigrid Kaag, is a former United Nations special envoy for Syria and the outgoing foreign minister of trade and development.

Because no party in the Dutch Parliament commands a majority, analysts said the idiosyncrasies of coalition building could bring Volt into the governing bloc along with Mr. Rutte and Ms. Kaag.

Whatever the outcome of that horse trading, analysts think Volt’s future is bright in the Netherlands.

“They could be big here and double their seats if they manage to go even stronger on the climate,” said Felix Rotterberg, a campaign strategist long affiliated with the social-democratic party PvdA. “Volt has the youth, and there will only be more of those in the future.”

The party is on a winning streak in other parts of Europe, though nothing else is as high-profile as its victories in the Netherlands. Volt now has over 30 elected representatives across Europe, mainly in municipalities in Germany and Italy. But it has also won its first seat in the European Parliament, in the person of Damian Boeselager, 33.

In coming months, Volt will be running candidates in national elections in Bulgaria and Germany, in a regional vote in Spain and in local elections in Italy. Following Brexit this year, its British members are starting a rejoin Europe campaign.

Its leaders emphasize Volt’s pan-European character, which they say differentiates it from any other party in Europe.

“Every one of our members, has direct voting rights at the European level, they are able to choose our board and influence our policies directly,” said Valerie Sternberg, 30, the party’s Germany-based co-president. “No matter where you live in Europe, even in Britain.”

The party doesn’t have a youth organization. “Most of us are young ourselves,” she said.

Ms. Sternberg said she cried “tears of joy,” when she learned about the success of Volt’s Dutch chapter, and said the party is now setting its sights on Germany, which is having national elections in the fall.

“Our weak point is in rural areas across Europe, we need to get our message there, now populists are winning there,” she said. “We hope that Covid is showing people that isolation makes us weak and cooperation makes us stronger.”