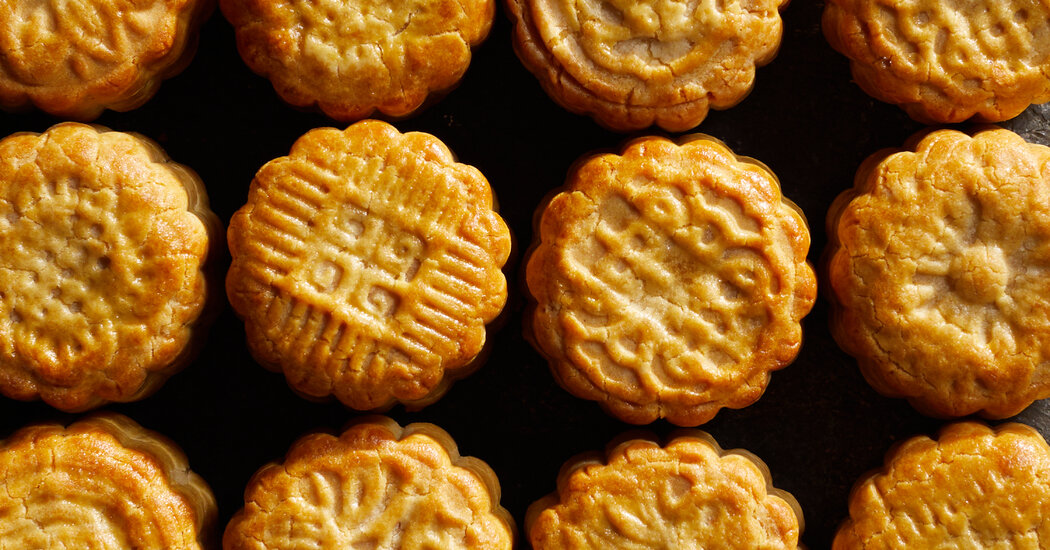 The cookbook author Betty Liu grew up in a California neighborhood with many Chinese bakeries but could not rely on them to satisfy her mooncake cravings.

“Most of them only sold the classic molded Cantonese mooncake,” she said. Ms. Liu’s parents are from Shanghai, where mooncakes are flaky and spherical, stuffed with juicy pork. Cantonese mooncakes, on the other hand, are dense, hockey puck-shaped pastries with soft, chewy crusts.

When Ms. Liu posted about the pork mooncakes on her Instagram, people accused her of inauthenticity, even though it was a recipe from her mother, who based it on memories of the ones she had eaten in China. “I got a couple of comments that were like: ‘These aren’t mooncakes. Don’t pass them off as mooncakes,’” Ms. Liu said. “But they were only familiar with the Cantonese style.”

While there are many regional mooncake variations throughout Asia, people are most familiar with the Cantonese iterations because the first Asian bakeries outside Asia were Cantonese. They also became the garden variety around the world because of the global influence of Hong Kong, where Cantonese cuisine is the standard.

In the late 1950s and ’60s, mooncakes “became known as a gifting item,” said Max Wong, the executive director of Kee Wah Bakery, a Hong Kong institution that has been around since 1938 and now manufactures over 10 million mooncakes a year. Before then, the pastries were baked only during the Mid-Autumn Festival, an annual event that celebrates the full moon when it is believed to be at its brightest. Mooncakes were prepared for personal consumption or to be presented as offerings to the moon. When Hong Kong became an international financial hub in the 1960s, however, the pastries were commercialized and widely circulated — bundled in elaborate packaging and given to clients and friends.

Though the Cantonese version may be the one best known internationally, there is no set rubric for the pastry. “Where we are, we stuff it with ham. It is a specialty of Yunnan,” said Dong Meihua, referring to the province in southwestern China where she lives in the countryside. Ms. Dong, who produces popular cooking videos on YouTube under the name Dianxi Xiaoge

Advertisement
, makes her mooncakes with homemade aged ham sweetened with honey. Cooked in a charcoal oven, they are pillowy and round, like golden orbs.

Staying true to the original intention of the autumn holiday, which falls this year on Sept. 21, Ms. Dong puts out a platter of mooncakes as a gift to the moon and lights sticks of incense over them as a show of gratitude for the annual harvest. “We put our best ingredients into our mooncakes,” she said. “It’s the highest form of respect to the Mid-Autumn Festival.”

Chong Suan, a proprietor of Chuan Ji Bakery in Singapore, pays his respects during the holidays by encasing melon and sesame seeds, shallots, rose sugar, preserved lime and orange peels in a thin crust that’s then gently pressed into a wooden, hand-carved mold. “It’s more like a biscuit,” he said, describing the texture. He inherited the 95-year-old recipe from his grandmother, who immigrated to Singapore in the 1920s from Hainan, an island province of China.

The pastry has continued to evolve with successive generations and as it travels across continents. The Chinese American blogger and cookbook author Kristina Cho makes a rendition with crushed pistachios and honey filling enveloped in a Cantonese molded crust. “Pistachios are luxurious to me,” she said.

If the intention of a mooncake is to show off the best of a region, then what it is made of will always be up for interpretation. “It doesn’t really matter what shape or size it comes in,” Ms. Cho said. “A mooncake is something that is small and decadent that can be shared with your closest loved ones.”

Holiday Gift Guide for the Restaurant-Obsessed

Exploring the Horrors of Rich-People Food, From ‘The Menu’ to ‘Fresh’

The Willows Inn Closes After Abuse Allegations and Lawsuits