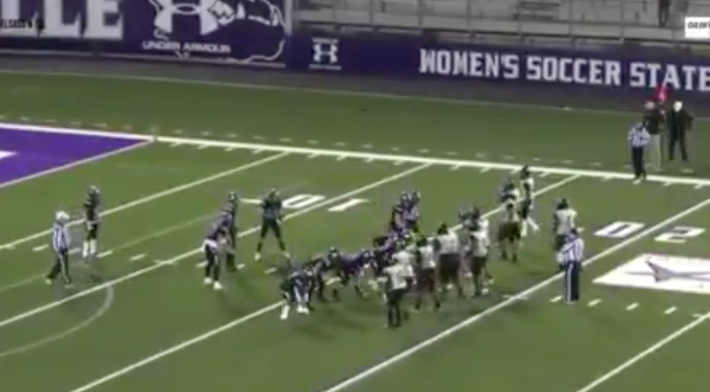 The script at the end of a close football game where a team has the lead and the opponents have no timeouts is as tried-and-true as anything: Take a whole bunch of knees, run out the clock, and walk off the field with the win. There are instances where this doesn’t quite work, and on Friday evening, we saw one of them play out in Arkansas.

The Fayetteville Bulldogs had a 35-34 lead with 15 seconds remaining. The game clock was slightly ahead of the play clock, and on fourth-and-32, they milked it quite a bit. A fatal error occurred, though, as the snap came with about four seconds on the clock and the quarterback, feeling the pressure, took a knee with about two seconds left. This wouldn’t be too big of a deal if not for the fact that the knee came on his own 10-yard line.

There looked to be some confusion after the play, but Central realized they had a chance to win. As such, they lined up for a field goal, booted it through the uprights, and celebrated like mad as they came out on top, 37-35.

Fayetteville accidentally takes a knee on 4th down with 2 seconds left and Central kicks the game-winning FG to win it. Tough way to go down 😔 pic.twitter.com/A70W7GS0we

Listen, gotta know time and score, but Central’s defense did a good job of pressuring the quarterback and making him rush into an early knee. As the saying goes, gotta play until the final whistle.