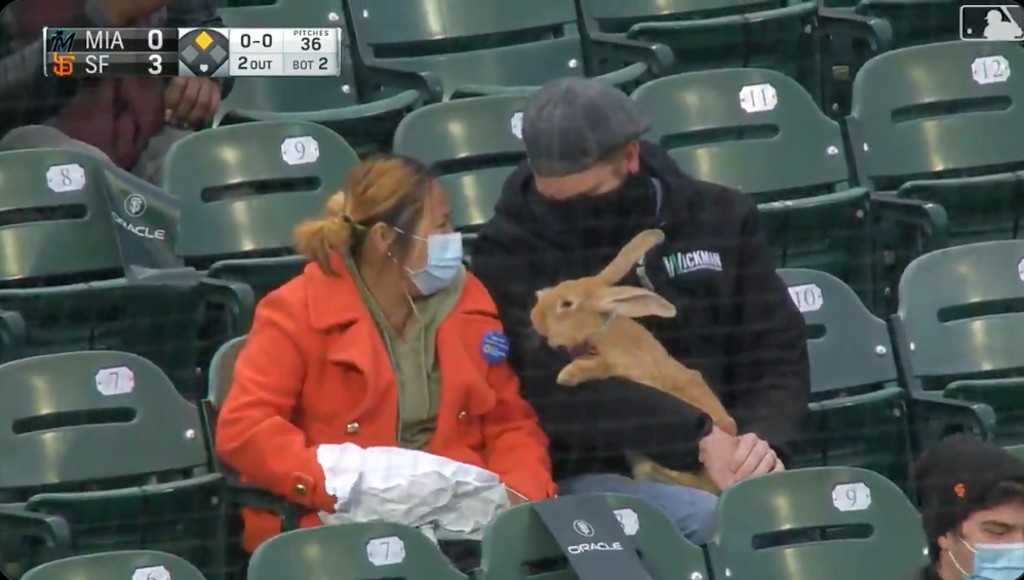 There are a lot of weird things you might see at a baseball game, but Thursday brought something new when the Giants broadcast turned their attention to a couple of fans in the stands who had…a rabbit?

It is as the commentators note, “a big fella,” and he is just taking in some baseball and maybe having some snacks. The broadcast team had some fun trying to figure out what exactly was happening, while also making sure to point out that you gotta be careful with too many snacks for the rabbit or you’ll have “smart pills” on your leg [poop, he’s talking about rabbit poop]. Now, if you’re wondering how the hell you get a rabbit into the game, this wasn’t a situation where they snuck it in, but rather the couple’s “therapy bunny,” which we learned thanks to some tremendous investigative work from Janie McCauley of the Associated Press who hustled down there from the press box for some hard hitting journalism.

Career-first: just interviewed a sweet bunny, 4 1/2-month-old therapy bunny Alex, and he gave me a kiss, too. It belongs to Kei Kato, who lost her restaurant during COVID. pic.twitter.com/mcc4i60x8K

Alex is an incredibly chill rabbit, as evidenced by him just hanging out, getting pets during this interview. He even has his own Instagram page, which chronicles the many things he does with his people.

As someone who had a rabbit as a child, I would not think you could get them to just hang out like this for hours on end at a baseball game, but salute to Alex, the world’s chillest bunny who has gone on more adventures than most people over the last few months.