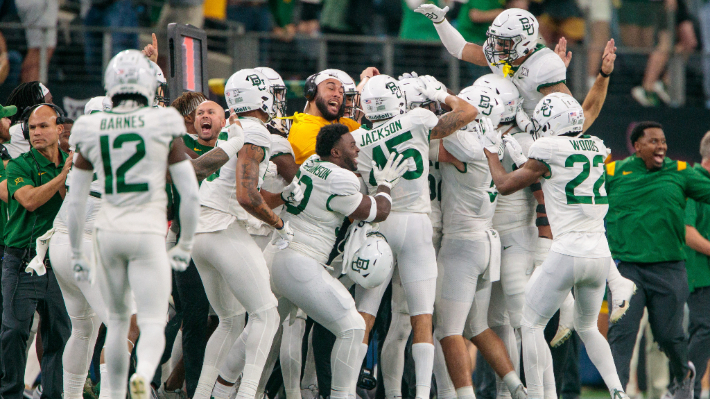 The Baylor Bears are the champions of the Big 12. Baylor took on Oklahoma State in Arlington on Saturday afternoon in a rematch of a game the Pokes won in Stillwater earlier this year. Despite fifth-ranked Oklahoma State needing a win to keep their hopes of making the College Football Playoff alive, Baylor was able to get revenge with a 21-16 victory.

It wasn’t particularly easy for the ninth-ranked Bears, though, as the Cowboys got the ball with 3:14 left and managed to march down the field. Despite there being 90 yards between them and the end zone, Oklahoma State kept chipping away until they found themselves deep in Baylor territory. And after a defensive pass interference in the end zone was called on a third-and-3, the Pokes found themselves with the ball on the Bears’ 2.

Oklahoma State found itself in this position earlier in the quarter, when they got the b all on the one, couldn’t punch it in on three attempts, and opted to kick a field goal. This time, though, they had to go for broke, and after one run gained a yard, another was stuffed, and a pass fell incomplete, one yard was going to determine who won the conference. Cowboys QB Spencer Sanders handed the ball off to Dezmon Jackson, who saw some daylight and decided to bounce it.

Unfortunately for him, Baylor’s Jairon McVea made one heck of a play to force him to keep going wide. Jackson dove for the end zone, was unable to reach the pylon, and as a result, the Bears won the football game.

This was as good a play as you’ll see by a defensive player, as McVea sniffed out Jackson trying to bounce it and did exactly what he needed to do. As a result, Baylor gets to call itself champions.