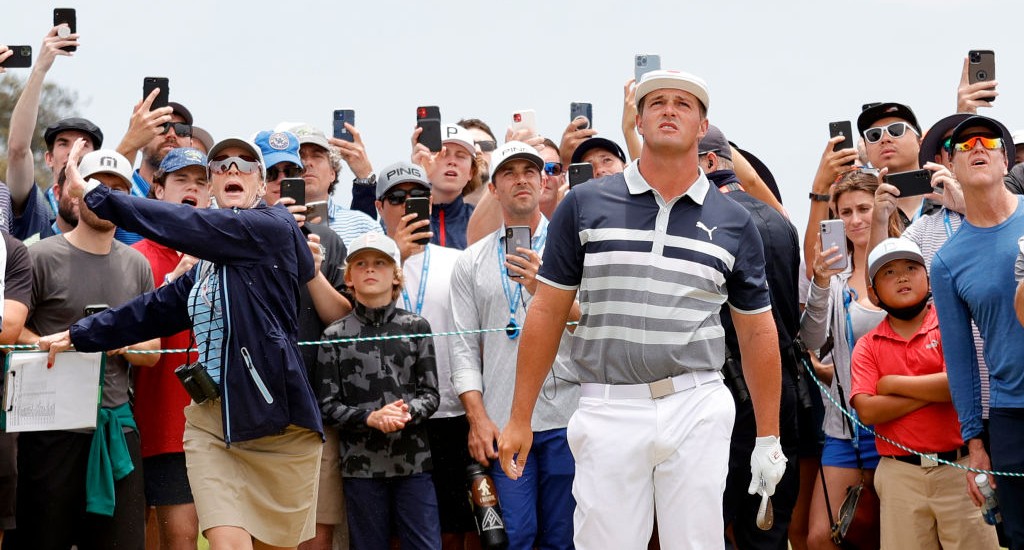 The final round of the 2021 U.S. Open at Torrey Pines in San Diego was a wild one, as the day started with a bunched up leaderboard that only got more crowded as the day wore on — at one point with 10 players within one shot of the lead. As the round continued, a lot of the expected contenders began to fall by the wayside as the grind of a U.S. Open started to yield the types of scores and frustration that we have become accustomed to at golf’s most grueling major.

Among those who were at the top of the leaderboard before backing out was 2020 U.S. Open champion Bryson DeChambeau, who was 5-under and in solo first briefly, before suffering a rather wild collapse on the back nine. After bogeying the 11th and 12th to fall to 3-under, DeChambeau blew his tee shot right on the par-5 13th and again found himself in trouble. As he waited to hit his second shot, things got extra weird as a fan ran out onto the fairway with a golf club and some golf balls and started launching shots off the cliff to the left, dancing before trying to evade security who made an incredible tackle from a golf cart.

Shouts to Rich Beem for capturing this moment the TV cameras wouldn’t show, because “idiots on the course” is a rarity in golf, but if it were ever going to happen, it was going to be on a hole where Bryson was. DeChambeau has become golf’s greatest villain, most notably feuding with Brooks Koepka who has not been shy about how much he hates Bryson, which has led to DeChambeau getting heckled with “Brooksy!” chants constantly.

The fake basketball shot into a juke on security was rather incredible, but the most impressive part of this is the guy that cuts him off with a golf cart, hops out, and tackles him in one motion, an absolutely phenomenal moment in great sports security work.