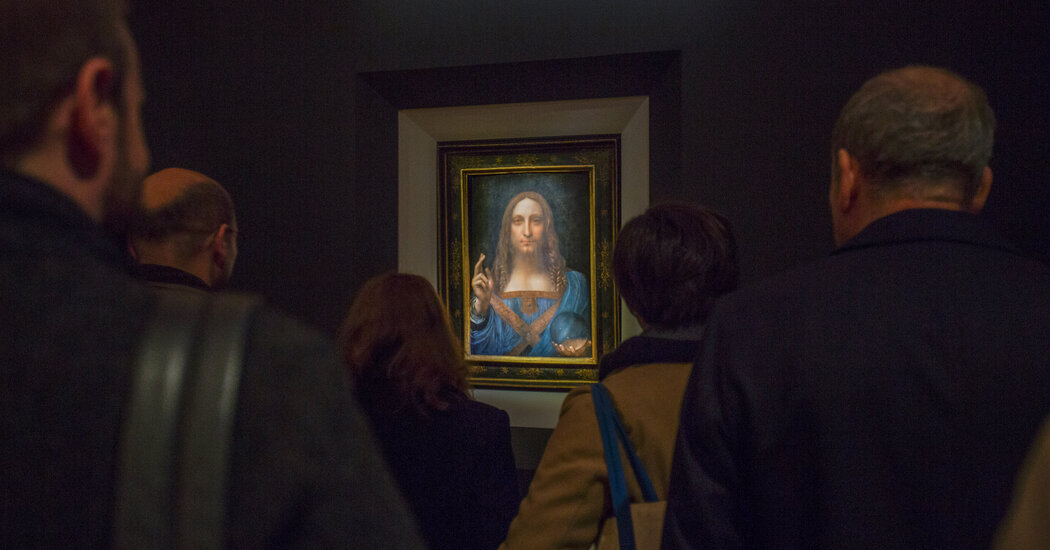 French curators had worked for a decade to prepare a major exhibition marking the 500th anniversary of the death of Leonardo da Vinci. When it opened, though, the most talked-about painting they had planned to show — “Salvator Mundi,” the most expensive work ever sold at auction — was nowhere to be seen.

Plucked from shabby obscurity at a New Orleans estate sale, the painting had been sold in 2017 as a rediscovered “lost” Leonardo and fetched more than $450 million from an anonymous bidder who kept it hidden from view. The chance to see it at the Louvre museum’s anniversary show two years later had created a sensation in the international art world, and its absence whipped up a storm of new questions.

Had the Louvre concluded that the painting was not actually the work of Leonardo, as a vocal handful of scholars had insisted? Had the buyer — reported to be Saudi Arabia’s Crown Prince Mohammed bin Salman, though he had never acknowledged it — declined to include it in the show for fear of public scrutiny? The tantalizing notion that the brash Saudi prince might have gambled a fortune on a fraud had already inspired a cottage industry of books, documentaries, art world gossip columns, and even a proposed Broadway musical.

None of that was true.

In fact, the crown prince had secretly shipped the “Salvator Mundi” to the Louvre more than a year earlier, in 2018, according to several French officials and a confidential French report on its authenticity that was obtained by The New York Times. The report also states that the painting belongs to the Saudi Culture Ministry — something the Saudis have never acknowledged.

A team of French scientists subjected the unframed canvas to a weekslong forensic examination with some of the most advanced technology available to the art world, and in their undisclosed report they had pronounced with more authority than any previous assessment that the painting appeared to be the work of Leonardo’s own hand.

Yet the Saudis had withheld it nonetheless, for entirely different reasons: a disagreement over a Saudi demand that their painting of Jesus should hang next to the “Mona Lisa,” several French officials said last week, speaking on condition of anonymity because the talks were confidential.

Far from a dispute about art scholarship, the withdrawal of the painting appears instead to have turned on questions of power and ego.

Some art world skeptics say they suspect the Saudis were never serious about including the painting in the French show, and had wanted to keep the work under wraps to increase the commercial potential of installing it later at a planned tourism site in the kingdom. Current and former French officials, though, say that the Saudis were eager for their newly acquired trophy to hang at the Louvre, as long as it was placed beside the world’s most famous painting.

Dismissing those demands as irrational and unworkable, the French, in turn, refused to make public their own positive assessment of its authenticity unless the Saudis let the “Salvator Mundi” be included in the exhibition in the Louvre, which the French government oversees.

And the resulting diplomatic standoff between the French and the Saudis has kept the painting out of sight as the cloud of intrigue around it continues to swell.

“Frankly, I think all that taradiddle would have evaporated,” said Luke Syson, the director of the Fitzwilliam Museum in Cambridge, England, a curator who oversaw a 2011 Leonardo exhibition at the National Gallery in London that included the “Salvator Mundi.”

If only the painting were displayed, he explained, “people could decide for themselves by experiencing the picture.”

Believed to have been painted around 1500, “Salvator Mundi” was one of two similar works listed in an inventory of the collection of King Charles I of England after his execution in 1649. But the historical record of its ownership ends in the late 18th century.

Then, around 2005, a pair of New York art dealers browsing a New Orleans estate sale spotted a badly restored and partially painted over image that they suspected might be worth a closer look. They acquired it for less than $10,000 and brought it to a skilled specialist to remove the later paint layers and restore the original.

It changed hands few times since then, and hung as a Leonardo in the 2011 exhibition at the National Gallery in London. But it was the record-setting bid in 2017 — for $450 million — that turned the “Salvator Mundi” into the stuff of front-page headlines, especially after The New York Times reported that the anonymous buyer was a surrogate for the Crown Prince of Saudi Arabia.

Now the controversy has made headlines again with the release of a new French documentary this past week claiming that the Louvre had concluded that Leonardo had “merely contributed” to the “Salvator Mundi.” Set to air on French television on Tuesday, the documentary features two disguised figures, identified as French government officials, asserting that Crown Prince Mohammed would not loan the painting to the anniversary exhibition because the Louvre refused to attribute the work fully to Leonardo.

In a telephone interview, the documentary’s director, Antoine Vitkine, said he stood by its claims, saying the president of the Louvre had refused to comment on the museum’s judgment of the “Salvator Mundi.”

The Louvre had insisted that the report on the painting’s authenticity “did not exist,” Mr. Viktine said.

Despite their denials, the Louvre curators had secretly prepared a glossy, magazine-style 46-page summary of the conclusions of their forensic examination of the painting. Its existence was first reported in March 2020 by Alison Cole of The Art Newspaper. Scanned copies of the confidential report became prized possessions among prominent Leonardo experts across the world, and The New York Times obtained multiple copies.

Experts at the Center for Research and Restoration of the Museums of France, an independent culture ministry institute, used fluorescent X-rays, infrared scans and digital cameras aimed through high-powered microscopes to match signature details of the materials and artistic techniques in the “Salvator Mundi” with the Louvre’s other Leonardo masterpieces.

The thin plank of wood on which the “Salvator Mundi” was painted was the same type of walnut from Lombardy that Leonardo used in other works. The artist had mixed fine powdered glass in the paint, as Leonardo did in his later years.

Traces of hidden painting under the visible layers, details in the locks of Christ’s hair, and the shade of bright vermilion used in the shadows all pointed to the hand of Leonardo, the report concluded.

“All these arguments tend to favor the idea of an entirely ‘autographed’ work,” Vincent Delieuvin, one of two curators of the anniversary exhibition, wrote in a lengthy essay describing the examination, noting that the painting had been “unfortunately damaged by bad conservation” and by “old, unquestionably too brutal restorations.”

Jean-Luc Martinez, the Louvre president, was even more definitive. “The results of the historical and scientific study presented in this publication allow us to confirm the attribution of the work to Leonardo da Vinci,” he wrote in the preface. (His current term is set to end this month, and President Emmanuel Macron of France is overdue to announce whether he will extend Mr. Martinez’s tenure or appoint a new leader.)

The Louvre was so eager to include the “Salvator Mundi” in its anniversary exhibition that the curators planned to use an image of the painting for the front of its catalog, officials said.

But the Saudis’ insistence that the “Salvator Mundi” also be twinned with the “Mona Lisa” was asking too much, the French officials said.

Extraordinary security measures surrounding the “Mona Lisa” make the painting exceptionally difficult to move from its place on a special partition in the center of the Salle des États, a vast upstairs gallery. Placing a painting next to it would be impossible, the French officials argued.

Franck Riester, the French culture minister at the time, tried for weeks to mediate, proposing that as a compromise the “Salvator Mundi” could move close to the “Mona Lisa” after a period in the anniversary show, the French officials said. .

And even after the exhibition opened without the “Salvator Mundi,” in October 2019, French officials kept trying.

Prince Bader bin Farhan al-Saud, an old friend of Crown Prince Mohammed who had acted as his surrogate bidder for the “Salvator Mundi,” had later been named Saudi Arabia’s minister of culture. When he happened to visit to Paris, the French culture minister and Louvre president led him on a private tour of the museum and exhibition to try to persuade him to lend the painting, the French officials said.

A spokesman for the Saudi Embassy in Washington declined to comment.

A planned section of the catalog detailing the authentication was removed before publication, and the museum ordered that all copies of the report be locked away in storage.

Sophie Grange, a Louvre spokeswoman, said museum officials would be forbidden to discuss any such document because French rules prohibited disclosing any evaluation or authentication of works not shown in the museum.

Corinne Hershkovitch, a leading French art lawyer, said these “long-held traditions” had been “formalized by law in 2013, in a decree establishing the status of heritage conservators.”

“It is soiled in a way,” he said, “because of all this unwarranted speculation.”